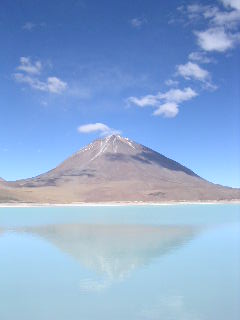 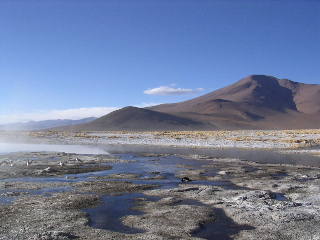 above sea level that is.

They were hot. Some people got in and told us they were. We were too busy taking pictures of the fantastic scenery. And it was a bit cold to strip off. 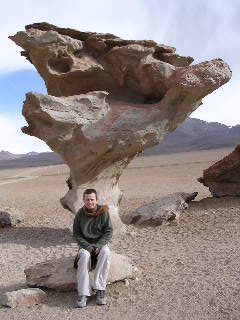 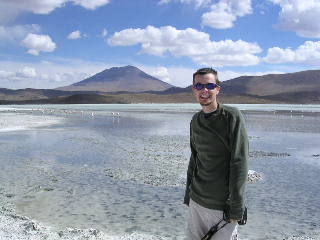 If you look really closely you should be able to make out some flamingoes in this picture. They were there. Just a bit far off for the digital to cope with. Nice setting for us to have lunch. Shame about the lunch we had! 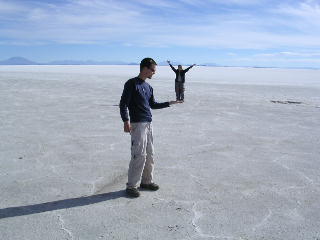 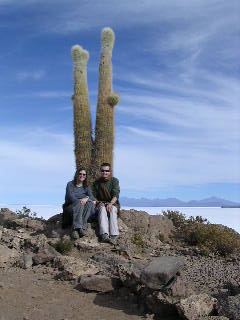 This is in the middle of the salt plains. You can climb to the top of the island, and you can just see bright white salt in every direction as far as you can see. Quite a sight (honest). The island is covered in giant cacti, the biggest of which is 12metres tall, and is estimated to be 1200 years old. 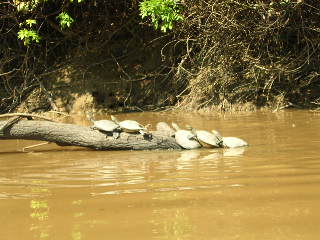 The turtles liked to get out of the water and sun themselves a bit. Not too many places they can do this, so they tended to end up piled up on whatever was handy. 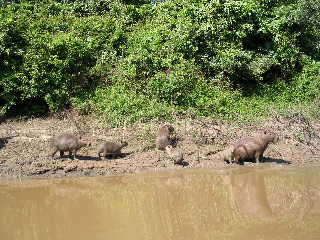 A family of Cabybara (spelling?), the biggest rodent in the world. 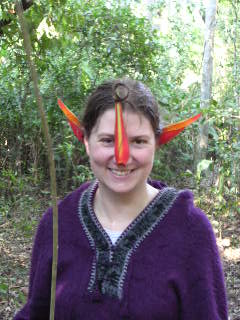 The plant these flowers come from is called the bird of paradise. Luis our guide took great delight in showing us how they can be used to make you look like a bird of paradise yourself. 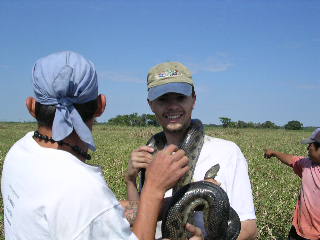 Clare was sick this day, so missed out on the anacaonda hunt. We walked for a total of 4 hours through squelchy swamp up to our knees (and occasionally higher). It was about 2 and a half hours in, when we were all very fed up, that we finally found one. Then we found another one a few minutes later. Just like buses. This one was about 2 metres long (6 or 7 foot in old money). 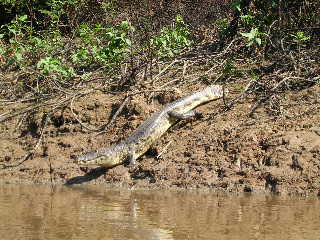 There were hundreds of them. You couldn't go for a minute on the river without seeing one basking in the sun, or a pair of eyes poking up from the water. They aren't that big on this river. The biggest one we saw was about 2 metres. We saw a few caiman too, up to about 3 metres. 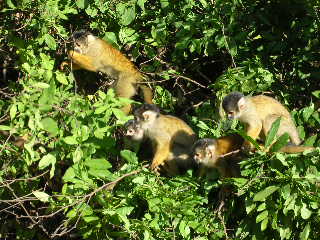 Squirrel monkeys. Lots and lots of them. The trip started with a 3 hour dugout canoe ride to the camp. We saw more wildlife in those 3 hours than we expected to in the whole 3 days.

Hello to Rasmus, Vibeka, Lars and Claudia if you come on here! 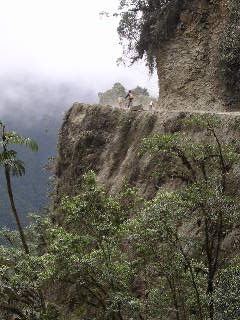 When we said we were doing the mountain biking, we may have failed to mention that it was down the most dangerous road in the world. Trucks and cars seem to fall off the edge with alarming regularity. It is pretty safe by bike though! In the past 6 weeks 2 trucks have fallen off, killing over 20 people. We can't believe it is still open. They have nearly finished a new road, so it won't be for much longer.

You will be glad to hear that we went with the best company, with the best bikes, and a lot of attention to safety. Cost a bit more, but it was worth it.

The first 3 hours or so was tarmac, then you reach the start of the narrow, dusty, stony, dangerous bit. It was hard work. Lots of braking and very bumpy. Regular stops to check the state of the bikes. The views were fantastic too. 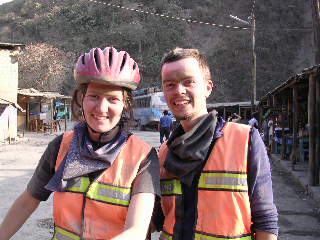 The end of the ride, and the best cold bottle of beer we have had for a long time. It took a total of 7 hours to ride the 60 or so kilometres down the road, descending 3800 metres in the process. Near the end the dust was up to a foot deep, and whenever a truck went past you had to stop till it cleared. We were rather dirty by the end!

we recommend it to those that have completed the Wycombe bike ride! 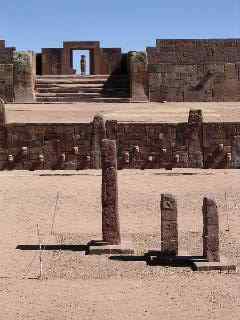 This is the site of the most impressive ruins found in Bolivia, and probably our last ruins for quite some time! The Tihuanacans were around a lot longer than the incas (2700 years compared to 300), but didn't expand as much. They aren't fully restored yet, but they are working on it. 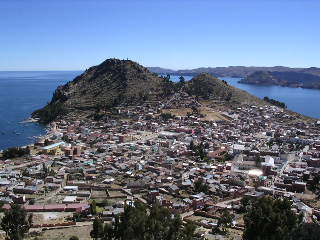 This is the view from the top of a hill behind Copcabana. We climbed all the way up to see the only sight of the town, a pre inca stonehenge thing. It wasn't worth it!, but the views were good. 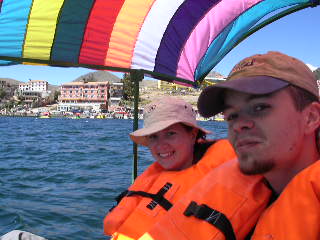 ...there was music, and pedalos, and ice cream. A nice little seaside town. We only stayed a day to break a journey. Nice rest though. Our first day in Bolivia. Everything is much cheaper here (even cheaper than Peru - we paid 6 pounds for our 3 star hotel on the lake front.