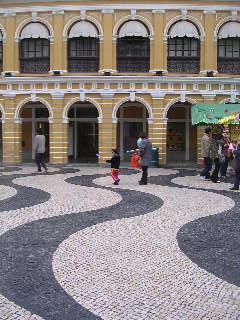 Macau used to be under Portuguese rule, and still retains some of that influence. The main square is surrounded by buildings in traditional colonial style. We also had a Portuguese meal, the best part of which was the bread roll. 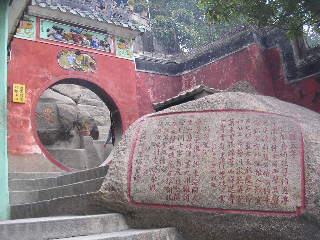 Another day trip, this time to Macau. It rained a lot of the day, but there is a lot to see there. We visited a few temples, 2 cemetaries, a fort and the remains of a church, said to be the greatest monument to Christianity in Asia. All that is left after a fire is the facade, which depicts scenes from the bible. One of them is Mary trampling a seven headed serpent though. Don't remember that part!

The photo is the A-ma temple, on the side of a hill at the southern tip of Macau. It is getting close to Chinese New Year now, and that means firecrackers. (here anyway, they are illegal in Hong Kong). I always thought firecrackers were just fireworks, a bit like the bangers we used to have. I was wrong. They are deafeningly loud. About as loud as that gun I fired a few weeks ago. 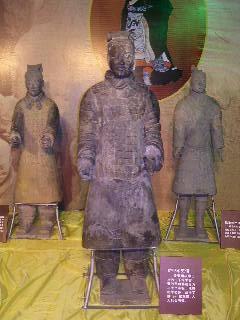 We had originally planned to go to Xi'an by train and see the terracotta army, but decided we didn't have time. We were pleasantly surprised to find that the aircraft carrier at Minsk World had about a dozen of the army in one of the rooms! They really are incredibly detailed, and all different. It must be amazing to see thousands of them all lined up in formation (eh, Aunty Eirlys?). 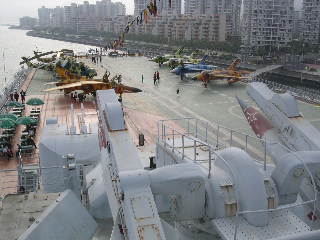 We ended up with 8 days in Hong Kong, as most flights were booked up. There isn;t that much to do, so we made a day trip over the border to mainland China. Only just over though, to a city called Shenzhen, where there was even less to do. Just outside the city though are a number of theme parks, such as splendid China and Seaworld. There is also one of the most unusual attractions in the world according to the Lonely Planet. A theme park centred around a decommissioned Russian aircraft carrier, complete with a Disney style war simulation. They have painted the Mig jets and helicopters in lovely shades of orange and purple. All the stalls by the carrier involve shooting guns or driving tanks (radio controlled ones unfortunately).