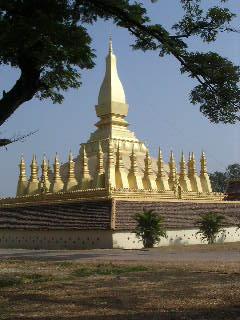 in Vientiene, the capital city of Laos. It is the countries national symbol, and one of its most sacred sites.

This will be our last stop in Laos. We fly to Hanoi in Vietnam tomorrow! 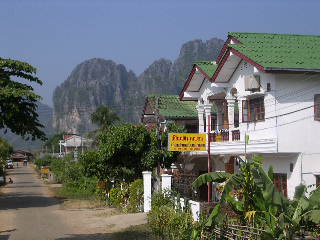 Just a shot to show the dramatic setting that the small town of Vang Vieng sits in. A bit like Ayucuchu back in Peru (that seems a long time ago now!) 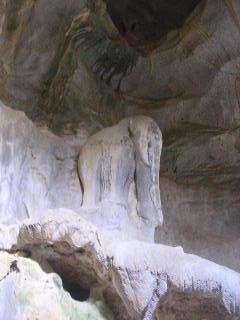 The area around Vang Vieng is known for the caves in the huge limestone rocks. The shape of this stalegmite gives this cave its name. We couldn't work out if they had deliberately shaped it or not! 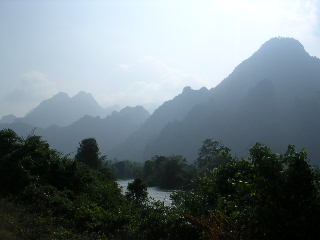 From what we have seen of Laos so far, it is entirely covered with pointy rocky mountains and hills. There aren't many flat bits! Great to look at, not so great to travel through. Very twisty roads, and it takes ages to get anywhere. 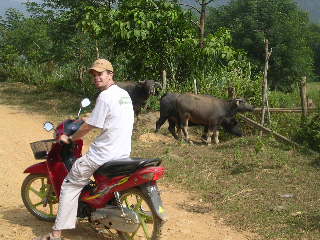 Another first for us, riding a moped. Before anyone says anything, there were no helmets. We rode everywhere pretty slowly though, and there isn't much traffic. It cost $5 US for the day! 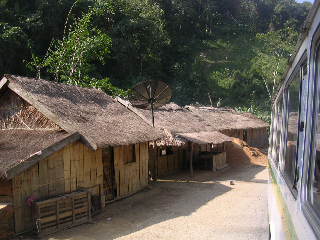 We took a bus from Luang Prabang to Vang Vieng, and on the way passed through a few small villages, with wooden shacks lining the sides of the road and children waving as we went past. Still get the odd satellite dish on the roof though! (and they get more British football than we do). 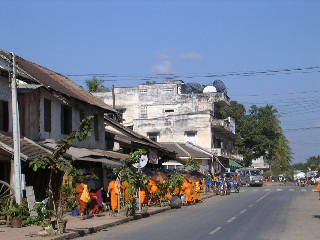 There are a lot of them in Laos. It is traditional for every male to be a monk at some point in his life. These days it can be as short as a week, but most do it. We have seen some as young as ten.

They don't seem to stick to the rules too strictly either. We have heard of or seen monks smoking, drinking alcohol, and touching women. 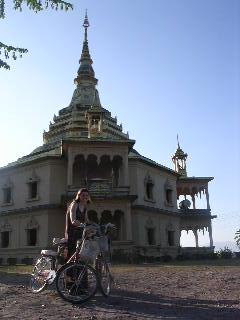 we had a relaxing day cycling around the town, and a bit out of it to get to this wat, which is a meditation centre. The 5th floor is a small dome just big enough to fit one person in meditating, along with the statues of Buddha (obviously). 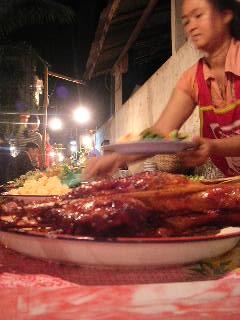 Another town another market. We have eaten at markets a few times, very nice and very very cheap. 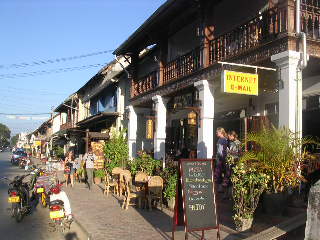 The main street of Luang Prabang, a small town on a peninsula between two rivers. It was a very relaxing place, although there were a lot of tourists.

The French ruled here for a while, and their influence can be seen. Some of the houses look rather european, they play boules, and the resteraunts sell wine and brie. 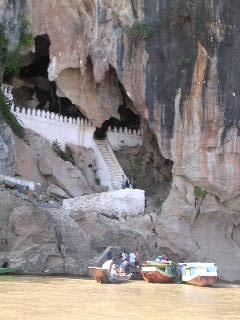 Near Luang Prabang. They contain a total of around 6500 images of Buddha! 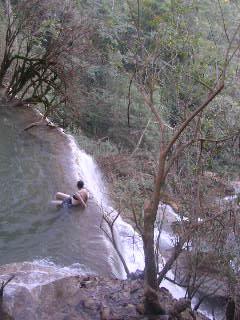 Just another pic to show how high up we were! 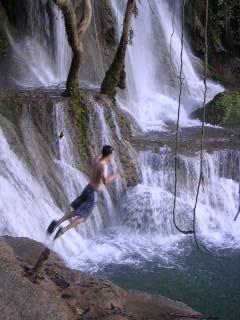 One of the highlights of Laos so far. We did a day trip which included a visit to this waterfall. We climbed up to the very top, across the waterfall and ended up at a fantastic pool. The view was amazing, and we had a swim to cool off. It was plenty deep enough to jump into too! 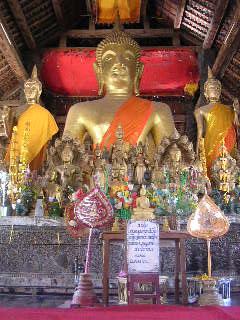 we've seen so many! These ones were in a Wat in Luang Prabang. They really seem to go for putting loads of them in each place here, but you still get the big ones! 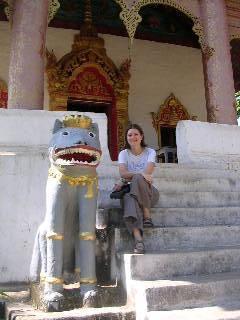 in Luang Prabang. Amused us! 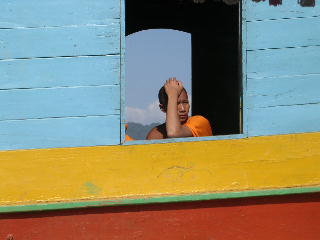 Another boat kept pace with us the whole second day. It was a cargo boat but was also carrying some novice monks. They looked a lot more comfortable than we did! 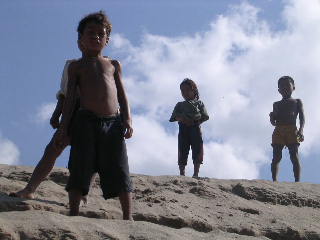 Every time our boat stopped there would be a group of children waiting. They would wave and say hello, which was luckily the first word of Lao we learnt (very like Zebedee). 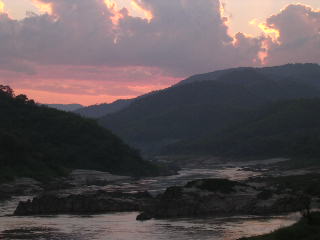 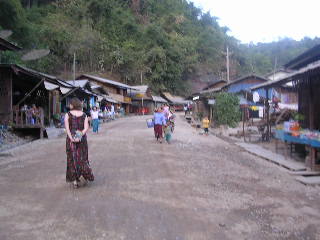 This is where we stopped off in the middle of our long slow boat ride. Dirt streets and lots of guesthouses. The people are friendly though! 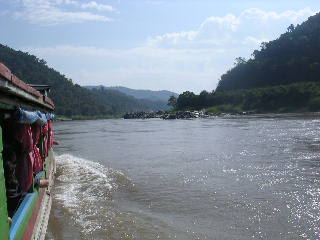 We spent the night on the other side of the river at a town called Huay Xai, then got the slow boat the next morning. It took 6 hours to reach Pakbeng, then another 7 hours the next day to get to our destination of Luang Prabang. The seats were hard wooden benches, and it got rather uncomfortable after a while! We read a lot, made friends, and watched the fantastic scenary go by. 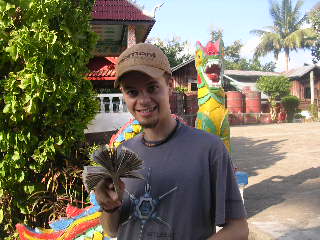 The Lao Kip isn't worth much. I am holding a little over half a million Kip, which is worth under 30 quid. It really fills up your pockets! They don't have coins at all, so you always have a wad of notes. 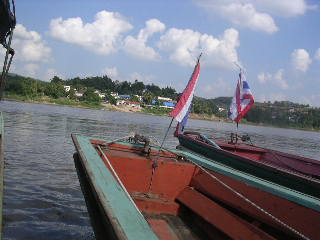 We found the border crossing by following the signs written on ripped up cardboard boxes, and got on a small boat to cross the Mekong into Laos.