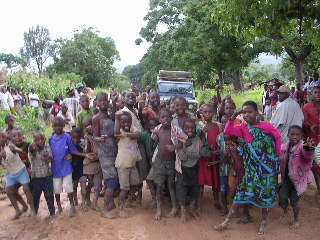 The rain stopped. No tractor to pull us out, but we now have a crowd of about 60 odd people standing around. A man called Macloud, captain of the village football team, suggests that they pull us out. Far too heavy I say. Its stuck. But why not? We have nothing else to try.

And it worked. They pulled/pushed/rocked us out to much cheering and shouting from all involved. One of the best experiences we have had in Africa so far. OK, so we were rather wet and dirty, but the people are so friendly and helpful.

We made a speech and presented them with a football that we had with us, which they were very pleased with. There was supposed to be a match that afternoon, but rain stopped play.

We never made it to Livingstonia. 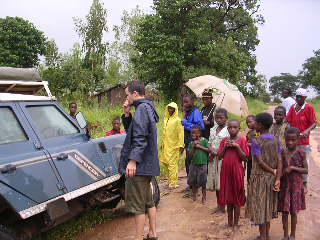 so, we are in a ditch. I know the road looks smooth and nice in the previous picture, but it was slippy OK? You'll just have to trust me on that one. I didn't just drive into it. Honest.

Anyway, it didn't take long for the villagers to notice, and they came out of shelter even in the torrential rain. As we pondered what to do the flowing water in the ditch got deeper and deeper until it was flowing through the car. Nice.

It turned out we were lucky to fall in a ditch so close to the one tractor in the whole area. A short walk got us to it, but the owner was out of town, and the driver was drunk. Plan B? 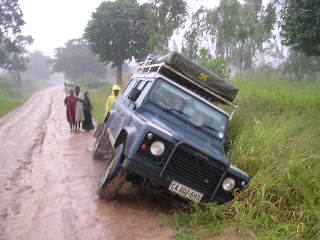 We set off for Livingstonia, one of the most beautiful areas of the country. Shortly after we left the highway and joined a dirt road lightning struck very close to us. Then the heavens opened and the rain came down like never before. The road turned to slime. The rest is history. 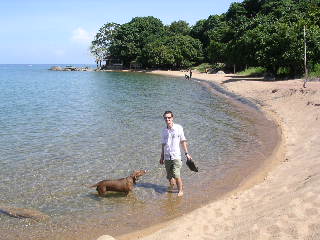 We stopped at a great place called Njaya in Nkhata Bay. Right on the shore of lake Malawi, a huge lake that stretches for most of the length of the country. Lovely empty beaches, clear water and blazing sunshine (some days anyway). The hostels dog Tia adopted us and wouldn;t leave our side the whole time we were there. She slept under our car and followed us everywhere we went. 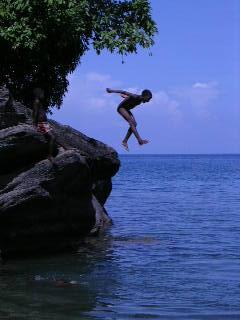 The beach really was fantastic. The sand was so hot it would burn your feet if you stood on it, but it was so quiet and picturesque. At the far end of 'our' section of the beach a group of children swam and played while someone washed their clothes and dried them on the beach. 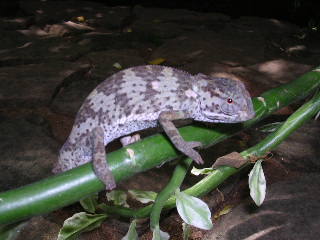 A chameleon! Never seen one of those before. It had just come off the stone path when this was taken, so was still quite grey. It didn't take too long for it to turn green and pretend to be a leaf though. Clever stuff! 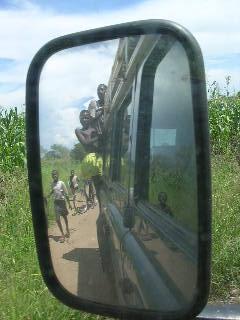 We passed through some very small villages on the road, where we caused quite a stir. We took a wrong turn at one point and ended up in a village where they probably don't see many tourists. A few cries of 'Mzungu' (white people!) from the children and everyone came out to see us. The children ran after us as we left, climbing on the back of our car and shouting. Nice to be a celebrity! 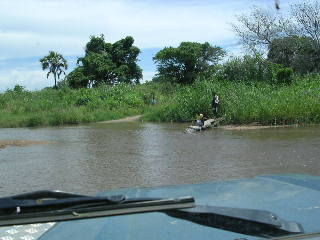 Our first one. Not a great photo, but you get the idea. As part of the 'main tarred road' we had to cross a river. Lots of locals turned out to tell us how easy it was, and walked through to demonstrate. We were a bit nervous, but made it through with no trouble! (it was only about 30cm deep) 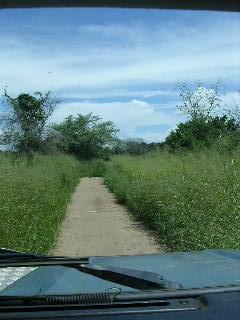 Our map said that this was a main tarred road. It was neither. We did pass a spot of tarmac about a foot across at one point, but that was all. The road was so narrow at times our car brushed the foliage on both sides! 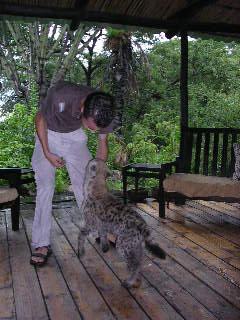 We stopped off at Liwonde National park, the best in Malawi. We were chatting with the manager when a hyena walked out of the lodge behind him. He explained that it was an orphan that they had raised. It was now 4 months old, and very scared of us.

For about 5 minutes anyway. To start with it swayed from side to side, and hid under the sofa, but after that it got rather too friendly. Those teeth are sharp! Thats why it is called bug, because it really gets on people's nerves! 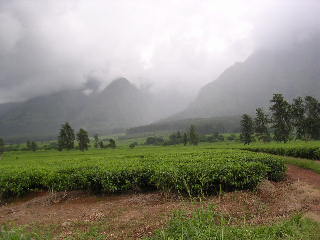 A place so beautiful that an American we met wanted to abandon his life at home and live there for ever.

When we got there it rained. A lot. We were parked about 500m from the mountain and couldn;t see it as it was hidden by cloud. Lightning flashed and thunder roared around us. We sat and ate lunch, and the mountain slowly reappeared, with hundreds of waterfalls pouring off it. Quite a sight. Glad we weren't hiking up it at the time though!