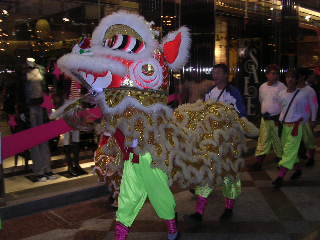 We thought we would have missed all the celebrations, but just around our hotel this evening a dance group performed what we assumed was a good luck ceremony with a lion "eating" offerings hung up outside shops.

The lion would rear up and eat the money and vegetable offereing. Chew for a minute, then spit out the veges over the shop floor (and shop assistants).

Don't know where the money went though! 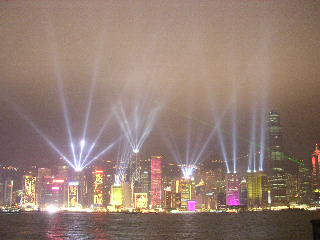 The Hong Kong tourist board has decided to put on a light show above the city on Hong Kong island every day from now on. Today was the first day. For the first month there are fireworks too. We managed to squeeze through the crowds and get a space right at the front (legs hanging over the edge). The 18 minute show made the skyline even more spectacular than normal. 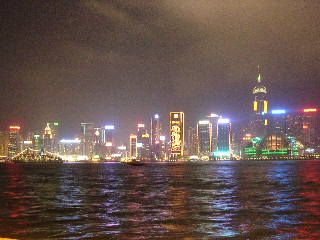 We went over to the mainland to Kowloon, still in Hong Kong territory though. The view back to Hong Kong island is amazing. It really is an impressive skyline, and they light up their skyscrapers very well! 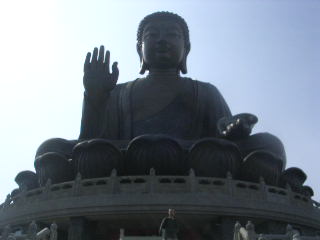 Not the biggest Buddha image in the world, but the biggest seated, outdoor, bronze Buddha image! Unveiled in 1993, it is still shiny and new, and it is very large! 22m high not including the pedestal. It is on Lantau island, one of the 200 or so islands in Hong Kong territory.

Hong Kong really comes alive at night, with thousands and thousands of shoppers filling the streets, wandering around the endless designer clothes shops. I have never seen so many! Gucci, Ralph Lauren, Calvin Klein, Prada etc etc are as common as Top Man and Dorothy Perkins in the UK. I have never seen so many shops selling Rolexes! Hong KOng has the highest number of Rolls Royces per capita as well. It is a rich place! 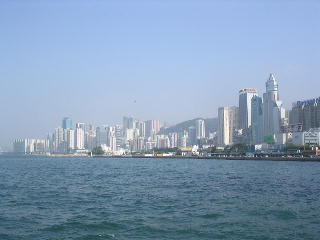 The first sight we got of Hong Kong island. The strip next to the sea is covered in sky scrapers, with barely an inch to spare. The rest of the island is too hilly to develop (although I'm sure they will in time!)

Hong Kong island only actually makes up 7% of the land area of Hong Kong territory. Didn't know that!