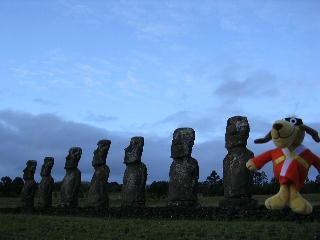 There is one head on the island, that is completely different to all the others. It is thought that it must represent a traveller who visted the island many years ago, and must have been such a super guy, maybe even quicker than the human eye.. 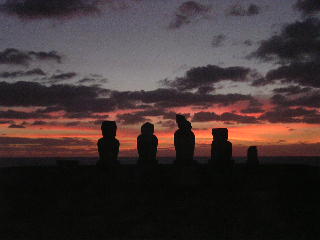 It was a long old day, this is now sunset over the heads nearest the town.

May is actually the wettest month on Easter Island, but we were very lucky with the weather, and had blue skies every day. Being the low season also meant that the island was nearly deserted, and we got to see most sites by ourselves with no other tourists.

Just another picture of some more heads. These are the only heads that face out to sea, and are thought to represent the original 7 explorers who found the island. 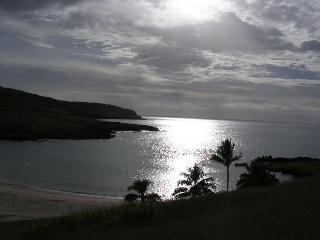 Nesstled between the volcanic rocks was a caribeean like beach, with golden sand, palm trees, turquoise water, overlooked by heads...

It really is a beautiful island! 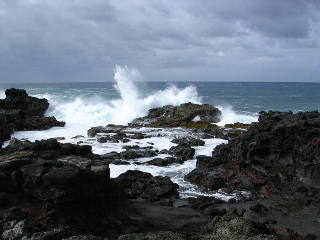 Just a piccie to show the waves. The coastline is all volcanic rocks, and the sea is very rough. The waves were huge, and we sat and watched them for ages.

After they got bored with the head thing (about 600 years), they started a whole new thing called the birdman cult. This was based on an annual competition, the prize being King for a year. Basically the strongest men had to climb down a sheer cliff face, swim though shark invested, very, very rough water to get to some islands just off the coast, get the egg of the sooty tern bird, swim back without breaking the egg, climb back up the cliff, be crowned King, and get the virgin.

They think that this had gone on for over 300 years. When the Chileans took over the Island in 1880s there were only 110 Rapa Nuis left.

Lord of the Flies madness it seems.... 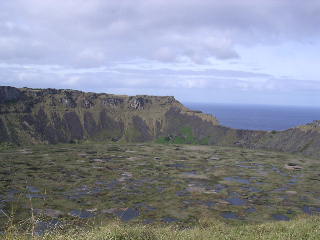 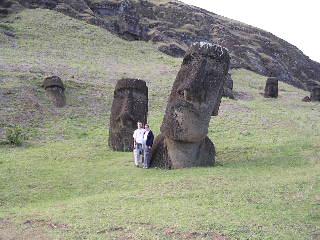 This was our favourite pair of mauis, and are probably the most photographed. They are some of the last ones carved, and are still at the quarry. Thought we had better post a photo with us in it, just to prove we were actually there!

All of the heads were carved at one volcanic crater. There are still loads of them there that either had been completed and not moved to their platforms, or are partially carved. They obviously gave up quite suddenly. They moved them to the platforms on the coast on log rollers. It is thought that one of the reasons they gave up is that they destroyed the entire islands tree population. 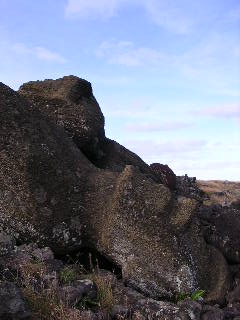 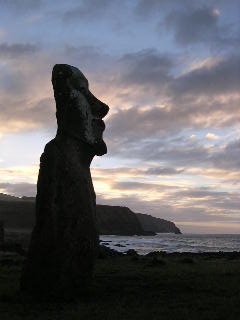