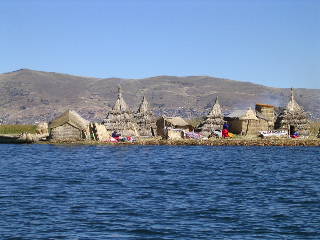 Near Puno there are a group of floating islands called the uros. They are made from reeds and people live on them permanently. Every so often they up anchor and move their islands.

There are a few that have decided to allow tourists on, and they are basically floating markets. Still a great sight though, especially their reed boats with a variety of figureheads. 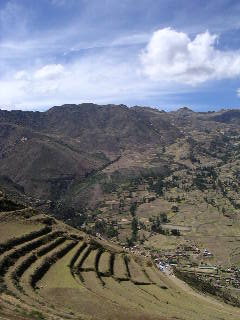 We visited Pisac as part of the sacred valley tour from Cusco. It was a good tour, and visited some ruins and local villages. Pisac was a large inca city a few hundred years ago. The teirs are thought to be an agricultural testing station, with different microclimates at different levels.

There are pubs in the UK nearly as old as these ruins you know!

This was our last day in Peru. We have had a great few weeks here. I can heartily reccomend it! 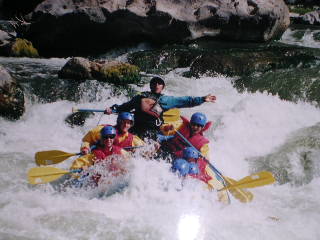 I had never done white water rafting before, and Clare has only done it once. We plan to do it again though because it was great fun! Might have to go for harder rapids next time.

Our boat was willing to try everything, including doing a deliberate capsize in the middle of a rapid. The water runs down from the snow capped mountains, and was absolutely freezing!

Clare is at the back on the right, and looks like she is about to fall in. I am at the front under all that water. You can just about see my helmet. 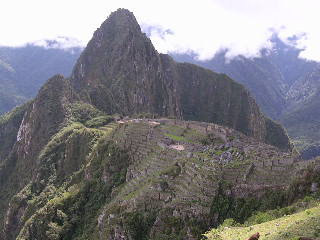 By lunchtime, the sun had finally managed to break through the clouds. Here is the classic view that appears on all postcards and in all books etc.

Whilst there we saw a humming bird, so we had gone from biggest to smallest bird within a few days. 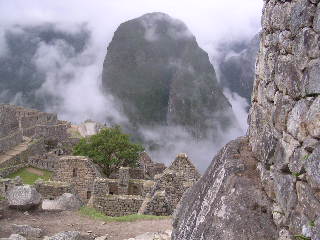 We left Arequipa and headed for Cusco, which is even nicer and cleaner than Arequipa. This was the centre of the Inca empire, and has loads of inca sites, and loads of tourists. We decided to head straight for Machu Picchu, so got up at 5.00 to get the 6.35 train. We got to the train station and joined the queue.... and waited, and waited, and waited. There was only one ticket seller, and it seeemed to take him at least 5 minutes to deal with each person. We were within 2 people, when the train chugged out of the station (5 minutes early). Luckily the person in front spoke english, and told us to buy our tickets then take a taxi to the next station. The taxi took 15 minutes, and the train took 1 hour. So we made it!

We spent the rest of the day in the little town just outside Machu Picchu, so that we could get into MP when it opened at 7am to avoid the hundreds of tourists.

When we woke up it was raining. Typical! It had been a glorious sunny day the previous day.

When we first arrived we went straight to the observation point, but couldn't see more than 100 metres.

This photo was taken mid morning, by which time we could make out the surrounding mountains. 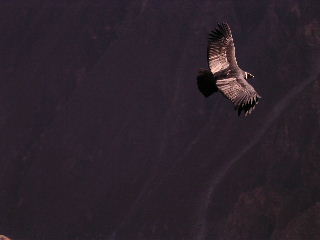 We got to the Colca Canyon at 8am after a 2 hour drive. Our guide had told us that the condors were not flying every day because of explosions nearby as a path was being carved out of the mountains. We heard a few explosions, but kept hoping..... and then we saw one, far down the canyon. and then another, and then another, and by 8.30 there were about 20 - 30 flying right over our heads.

The Condor is the largest flying bird in the world, with a wingspan of around 3 metres.

The canyon is apparently twice as deep as the grand canyon, but I don't think it is anywhere near as impressive. 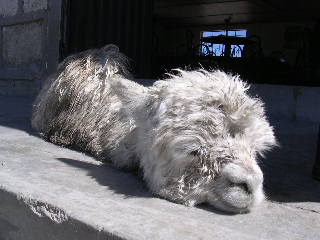 We took a tour from Arequipa to the Colca Canyon, and on the way stopped off at a cafe to have some coca tea (for the altitude - 4800 metres at the highest point). The tea was horrible, so we just put coca leaves in our mouths to suck instead, which wasn't too pleasant either.

At the cafe were some women in typical dress selling souveneirs (as usual), but these had really learnt how to please the tourists. They all had small children with them, also dressed in traditional gear, plus baby animals. The photo is of a baby alpaca (cousin of the llama). 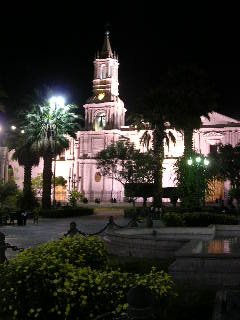 We travelled from Nasca to Arequipa, where this photo was taken. It is of the cathedral and the Plaza de Armas. I think it is the nicest city we have been to so far in Peru, very clean and picturesque. One of the towers of the cathedral was completely destroyed in 2001 by an earthquake, but they have rebuilt it so well that we couldn't work out which one it was. We think the photo is of the one that was destroyed and rebuilt. 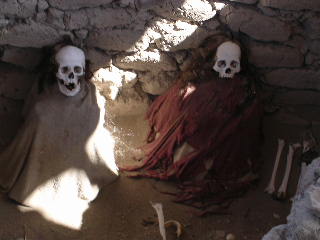 This is at a cemetary near Nasca. The graves were opened by robbers in the 1930s, and some have now been reconstructed to bring in the tourists! 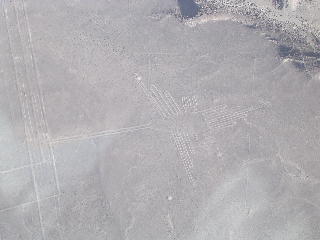 Here is the humming bird from the plane. They really are amazing. This geoglyph is about 100m in length. There are about 100 different ones, along with around 10,000 perfectly straight lines. No one knows for sure what they were for. The current favourite is that the lines were to show the gods where they needed water, and the symbols to help the shamen on their spirit travels. There is always the aliens theory though! 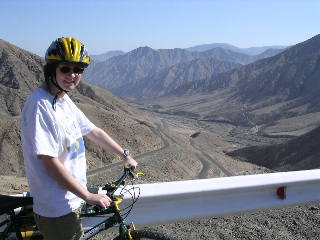 We are currently in Nasca (where the lines are), and this morning we did a 30km bike ride in the desert. We paid money to do it too!

Not as bad as it sounds. We were driven 2000m up into the mountains, and then cycled back down. Downhill 99% of the way. On the way we passed the highest sand dune in the world (about 2050 metres high.) 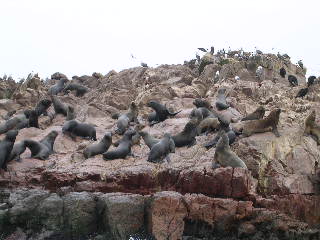 We took a boat trip out from Pisco to a group of islands called the Ballestas islands. The name means bow (as in archery) due to the shape of the eroded rocks. They are also covered in hundreds of sea lions, thousands of birds, and 4 penguins. 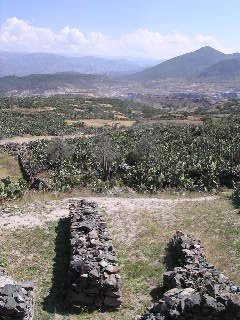 This is near Ayacucho. The Wari were one of the pre inca cultures, who were around about 1000AD. This was the capital city. The best tale we were told was of the mummified kings. Apparently they were removed from their graves to take part in important events and festivals throughout the year. Nice! 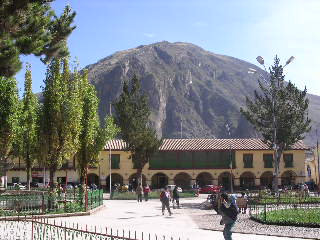 Just a view from the plaza... 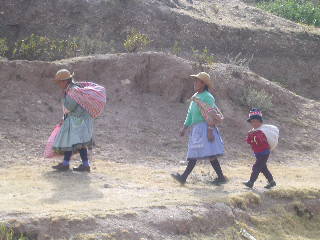 Up in the towns of the Andes, a lot of the women still wear traditional dress. The brightly coloured cloths on their backs often carry children. You can tell by the odd arm or leg sticking out. 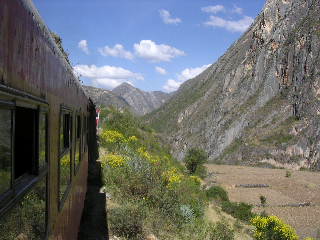 It was so good we put up 2 pictures. One Pound fifty for the 7 hour journey through the mountains. Bit cheaper than in the UK! We got seats and a table too. 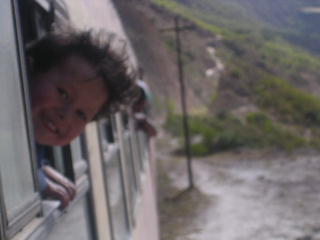 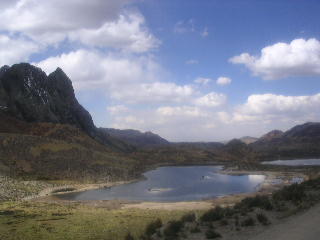 This is on the road between Lima and Huancayo, heading up into the Andes. We only really did the journey for the scenery on the way. fantastic it was too. 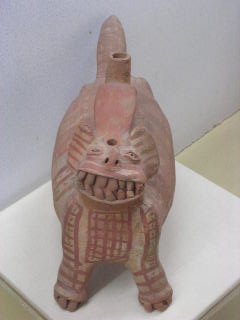 This is part of a painting of the last supper that isin St Francis church in Lima. I took it because it shows Jesus eating guinea pig and oranges. Not the normal representation. This was part of the ploy by the Spanish to convert the incas to Catholism. They also made the pictures of baby Jesus look like the sun god, and said that Pacha mamma (kind of like mother nature to the incas) was in fact the virgin Mary. The nativity scenes have llamas, pumas and leapards in. It obviously worked as 90% of peruvians are catholic. 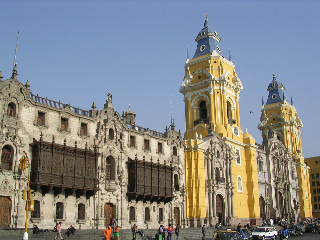 This is the cathedral and archbishops house on Plaza de Armas. The cathedral got demolished twice by earthquakes and is mostly built of wood now. Very colourful too. 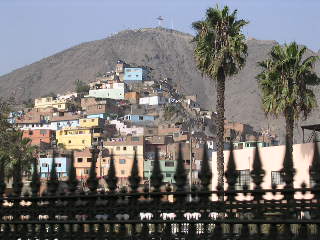 In the background of this one you can see the hill we had just been up (St Cristobal), and part of the rather poor area we drove through to get there. 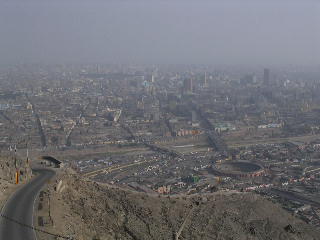 Went on a trip in a minibus up a very windy road with no barriers at the side. At the top you got a great view of the city in every direction. Shame it is so smoggy. 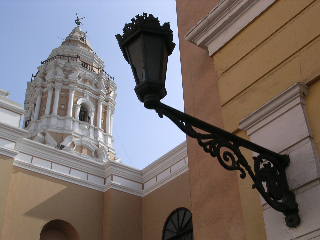 After that first night in Lima, we moved to the Miraflores district which is really nice. very modern. A much nicer place to stay. We visited the historical centre which is where most of the photos from today were taken. The initial impression was a bit bad, but there are definately some nice parts of town! 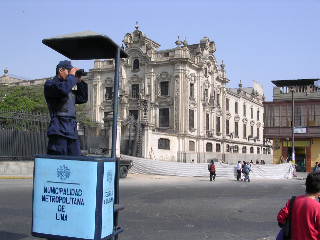 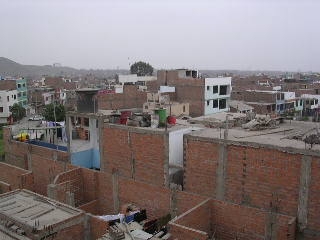 We arrived in Lima at about 4 o clock this morning, after a 5 hour delay because of a fault on the plane. Luckily we had pre-booked a hotel, and they were there to pick us up.

This photo is a view from the top of the hotel looking into Lima. We will be venturing further into the city this afternoon, when we move to a more central hotel.

More pictures will follow in a couple of days.